12/01/2012
At the End of last year I bought the Fujifil X100 and started using it quite a lot. The new photos on the website are all taken with the new camera. In this article I present some of my experiences with it. 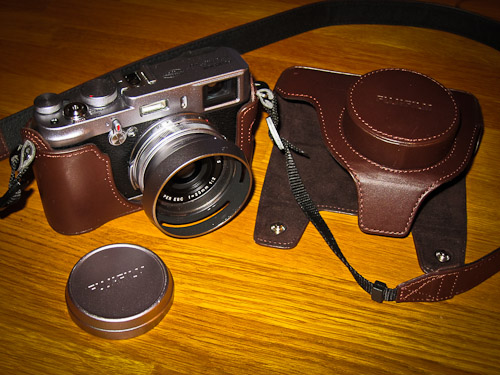 The last few years I have shot the serious shots with the Sigma equipment.. For certain occasions I use a Canon S90 compact camera. Although it is possible to take photos only using the LCD screen like on the Canon, I fell much more in control with a viewfinder.

At the End of October 2011 I therefore bought the Fujifilm X100 camera. Not only because it is an attractive camera from its form and design, but also because it can deliver very good results. In the days of film I used for some time a Voigtänder Bessa R2, a camera I liked a lot. The Fuji X100 and even more the newly announced X-Pro1, are made in a similar fashion.

What I love with the rangefinder style cameras is that it covers only one eye, in my case the right eye. Because the viewfinder is on the left side of the camera, the camera do only cover the right eye, while I can keep the left eye open an control the scene at the same time. When I shoot vertically, I hold the camera up, so that it still only covers the right eye. The view finder do no show the scene in 1:1, but yet is no problem to have both eyes open to see. A couple of years ago I bought a still working Voigtländer Vito BL from 1957. It has a viewfinder that shows the scene in 1:1, an incredible clear and good viewfinder. If it could be possible to make such viewfinders again, it would be even easier to look with both eyes open.

Meanwhile I have shot close to 2.000 photos with the Fujifilm X100. After about 1.100 photos the lens got the so called “Sticky blades” problem. It took only one Week to fix it and it got a new lens. After the change I have so far not experienced any problems.

It is a joy to use and I have been shooting much more with it than I normally do shoot. The low weight and rather small size makes it easy to take with me. The 35 mm equivalent lens gives the camera for me a very useful slight wide angel. It fits to much of my photography as can be seen on the photos I show here. Many were shot with the Sigma lens at 18mm, with is some wider. Because of the Sigma 1.7 crop factor, it equals 31 mm, slightly wider. So I am quite familiar with the wider angels.

It is quite refreshing to work with this camera with a fixed lens and not with a zoom. I move myself some more to compose the photos. It makes me think more how to capture a scene.

Of course I have travelled earlier only taking the Sigma DP1 and/or DP2 with me. But the use of these is not quite the same because of the lack of such a wonderful viewfinder that the X100 has. I have the optical viewfinders on the Sigmas, but they are actually not of much help. One has to work mainly with the LCD screen what can be difficult in sunlight. With the Sigma compacts I have only worked with the auto focus, while the other settings have been mainly manual like shutter and aperture settings.

But with the X100 it is the opposite. So far nearly all my shooting has been done with manual focusing and setting. Although I use the manual focusing setting, I normally start with a push on the "AFL/AEL" button. The camera focuses in on what I am pointing it at in the viewfinder. Because it has a DOF scale, it is easy to judge if it has focused on the right spot. If necessary I can push the upper dial and get a magnification of what I am seeing and I can fine adjust the focus with the wheel on the lens ... quite easy and fast.

Normally I will choose ISO, shutter and aperture manually. The auto ISO seemed somehow tricky. Maybe it should only be used with shutter and/or aperture priority settings. Mostly I will shoot at ISO 200 in daylight, but I have also worked up to ISO 3200, which produces rather acceptable results, especially in prints. This is impossible to do with Sigma, that has a reach from ISO 50 to 400. Now I can shoot in quite dark scenes without using the flash light. Some examples can f.i. be found in the “Oslo” gallery under “Norway”.

Recently I tried a recommendation for shooting in low light. I chose an aperture priority of F5.6 and ISO 1600, and then I used the EV compensation deal until what I was seeing on the LCD matched in general the true brightness of the scene. The LCD is usable for this kind of scene control. Only the distance had to be selected correctly.

Because I shoot RAW, I have not tried much more of the settings. For my use I find it very easy to set up. For the landscape shooting I have used the built-in ND-filter and also added external ND-filter. I have a separate article on the use of ND-filter. When shooting long time exposures in this way, I will set the self timer to 2 seconds to avoid vibrations in the camera from activating the shutter.

From processing the photos in Adobe Lightroom, my impression is that the Fujifilm RAW photos are more truthful to color than the Sigma RAW photos. Somehow the process is shorter to achieve good results. But I can’t at the moment pinpoint why. My idea is to take the Fujifilm and the Sigma SD15 with the 18-50 mm EX set to 20.5 mm to compare the photos from the same scene and lightning.

Anyhow I am so far very satisfied with the Fujifilm X100 and it has boosted my photography. I am enjoying it in a refreshing way.